DIGITUS®
Simple and cost-effective network and power supply via Power over Ethernet (PoE)
Power over Ethernet technology is used when network devices such as IP cameras, access points or IP phones need to be supplied with data and power at the same time using a single cable. This saves time and expenses since the installation cost is kept to a minimum.
Devices and access points can be positioned where they are required at any time without needing to be connected to an outlet. This makes the system extremely flexible.
PoE supply is also intelligent: the system protects devices against overload, undervoltage or improper installation.
After the introduction of PoE technology in the early 21st century, the use of CAT5/RJ45 technology for simultaneous transmission of power and data over the network has become increasingly more widespread.
Save additional installation costs for standard power supply! 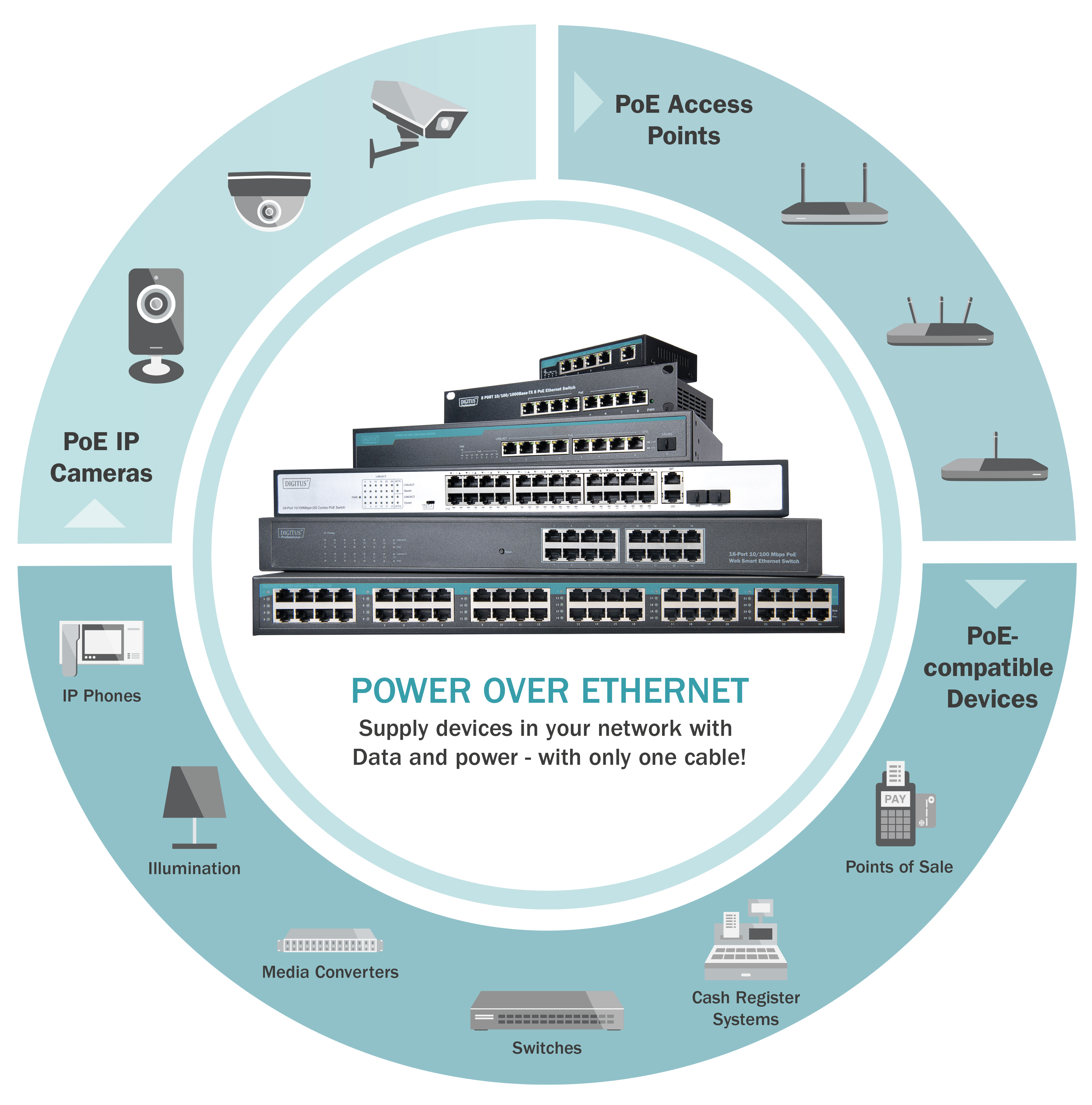 POE – ALL THE ADVANTAGES AT A GLANCE
FUTURE-PROOF
The system grows with your
requirements
SCALABLE
Can be adapted to the environment
using switches and converters
CENTRALLY ACCESSIBLE
Central management of
the PoE end devices
COST-EFFECTIVE
No additional power
supply required.
DIGITUS®
POE – STANDARD
The first standard for power supply over data cables (PoE Type 1) is ideally suited for operating end devices with low power consumption such as IP phones or WLAN access points. Two strand pairs are used for power supply, whereby the stand pairs engaged for data transmission are optionally available for power supply.
The ongoing development of the standard with Type 2 achieved an increase in bandwidth to 1000Base-T along with an increase in the power transmission capacity. All four strand pairs are used for data transmission, and power supply is provided through two of the pairs.
With four-pair feed-in (4PPoE), all four strand pairs are available to power the end devices for the first time. This standard is subdivided into two classes: Type 3 has an end device. 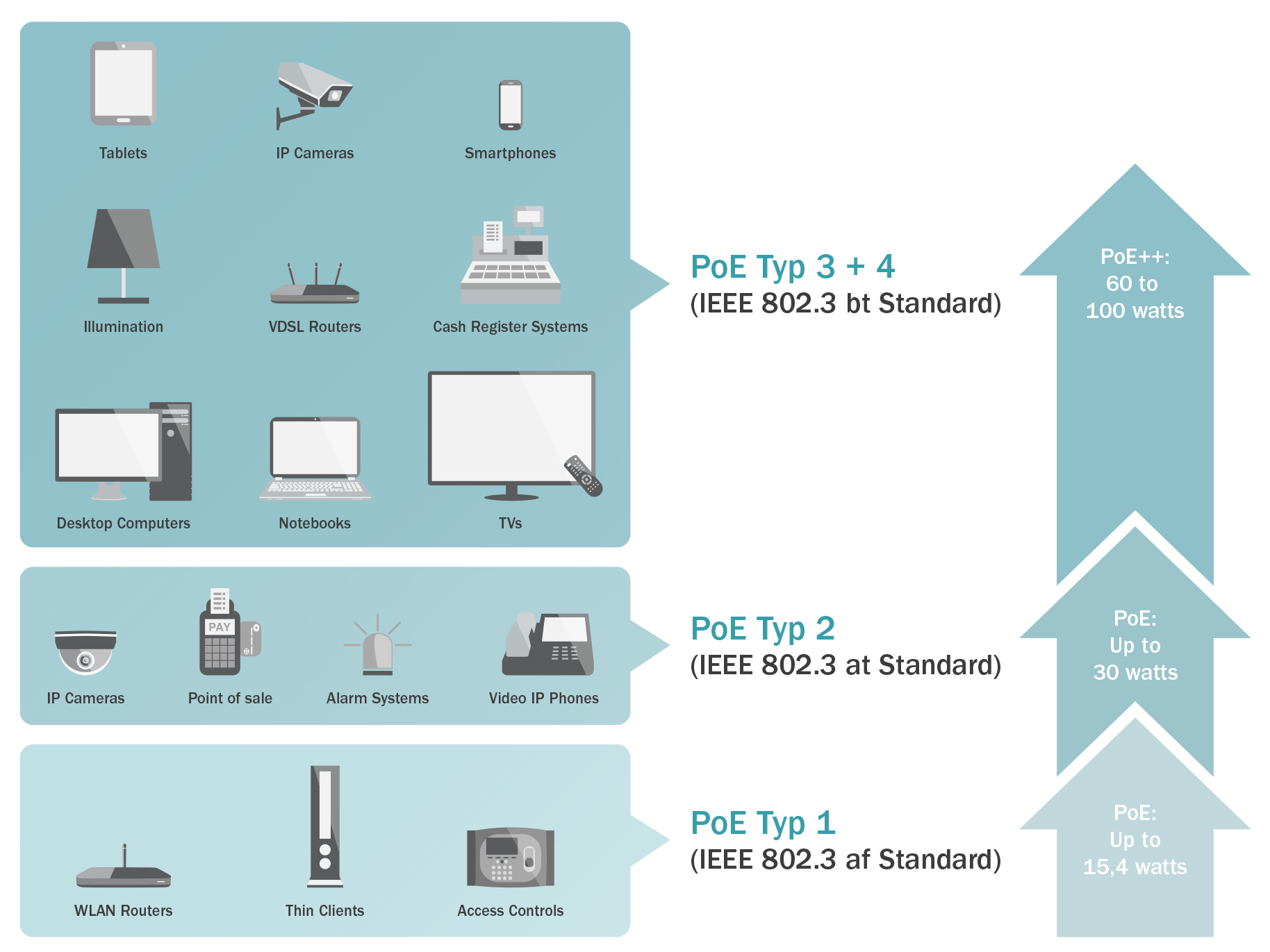 DIGITUS®
POE-INJECTORS
In order to operate PoE devices without a PoE-compatible switch, one alternative is to use PoE injectors,
also known as mid-span or PoE adapters. This means the devices are supplied with power and data
through a single Ethernet cable in the appropriate category (5E, 6, 6A etc.).
The use of PoE injectors is particularly recommended if devices with low power consumption need to be
set up in locations where no outlet is available. This makes the entire system flexible, and devices can
also be installed in difficult to access areas with a minor impact on existing structures. 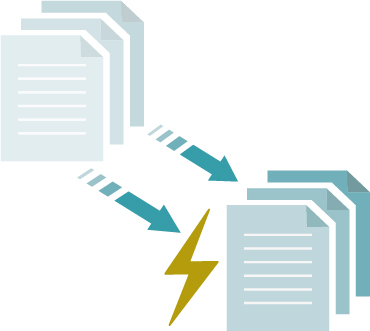 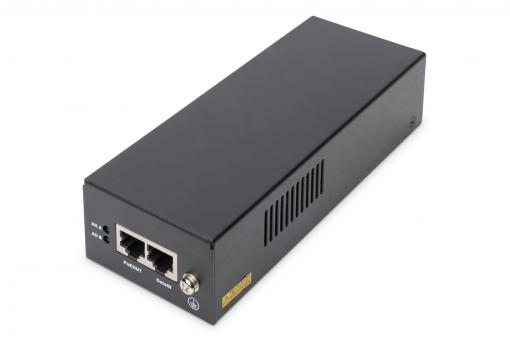 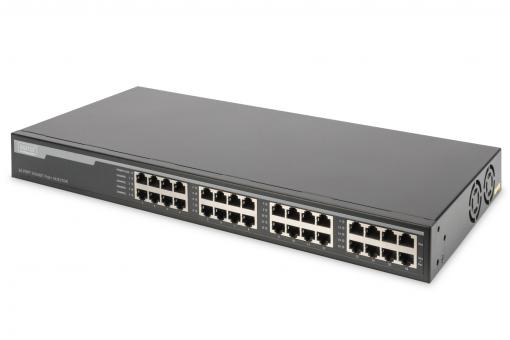 You can also bridge large distances
Connect to ports that are far away or difficult to access or bridge large distances using a PoE extender that relies on the latest network technology to extend the PoE Ethernet signal by up to 100 meters per unit.
PoE extenders make it possible to maintain the required output all the way to endpoints at a distance.
Easy installation:
Connect the PoE extender to the PoE cable section to strengthen the PoE signal and forward it via an additional copper cable to the PoE end device or next PoE extender.
Network expansion:
By connecting the PoE extenders in series, a total range of 300 m can be achieved.
DIGITUS®
FAST ETHERNET POE+ REPEATER
Product number: DN-95122 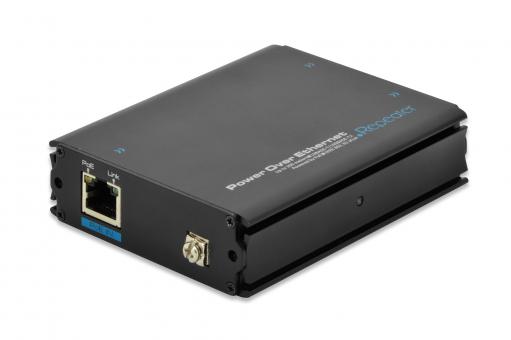 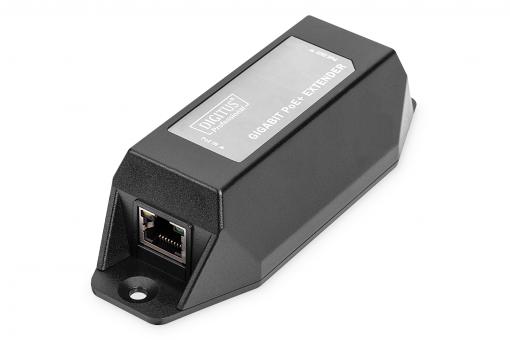 DIGITUS®
POE-SPLITTER
A PoE splitter is used to supply power over a data cable to a device that is not PoE-compatible. The network and PoE signals received over the LAN cable are separated by
the splitter and the PoE signal is emitted, separately from the network signal, in 5, 9 or 12 volts over the DC jack. Thus the Ethernet signal is now only present at the RJ45 jack.

PoE Splitter – here's how it works! 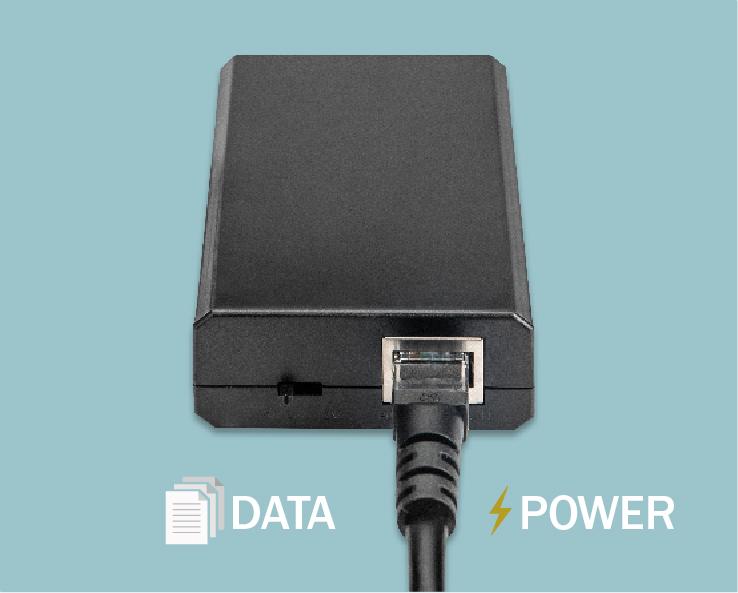 Power and data are transported to the PoE splitter over the network cable. 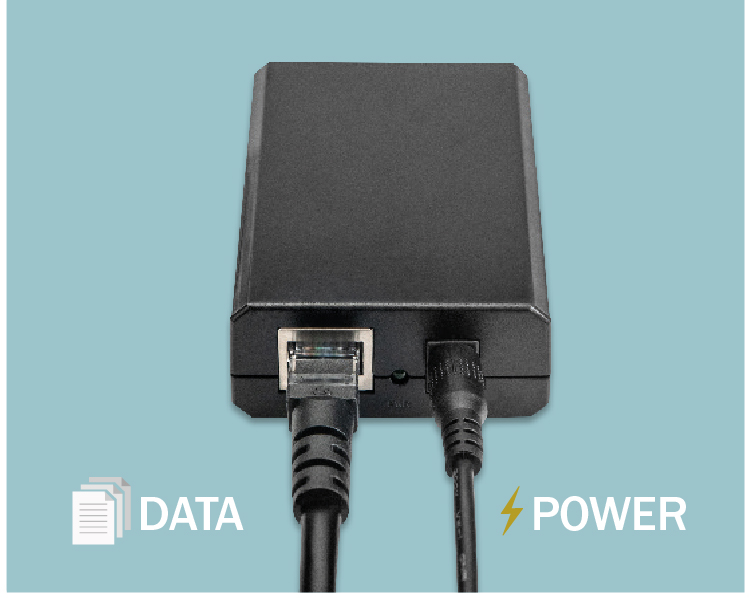 The PoE splitter separates the power that is transported over the network cable and emits it from a separate output on the back side of the device. 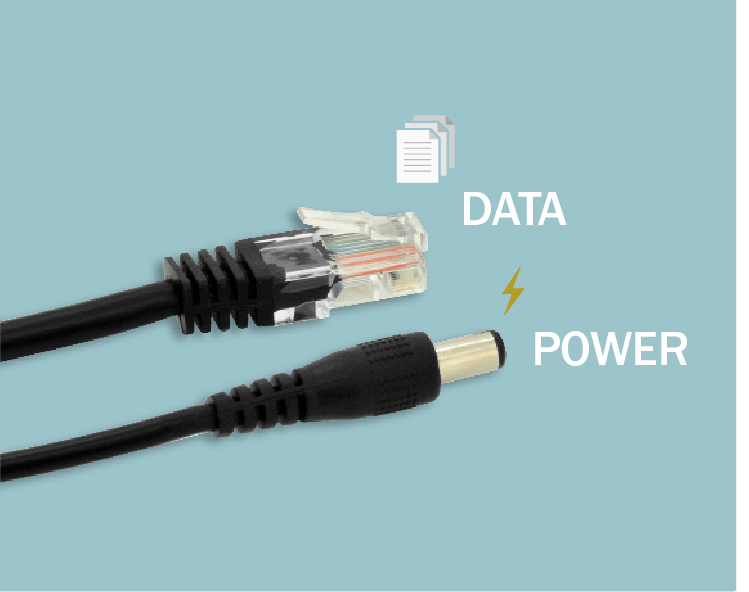 At the same time, the data is forwarded via an additional RJ45 connection point. 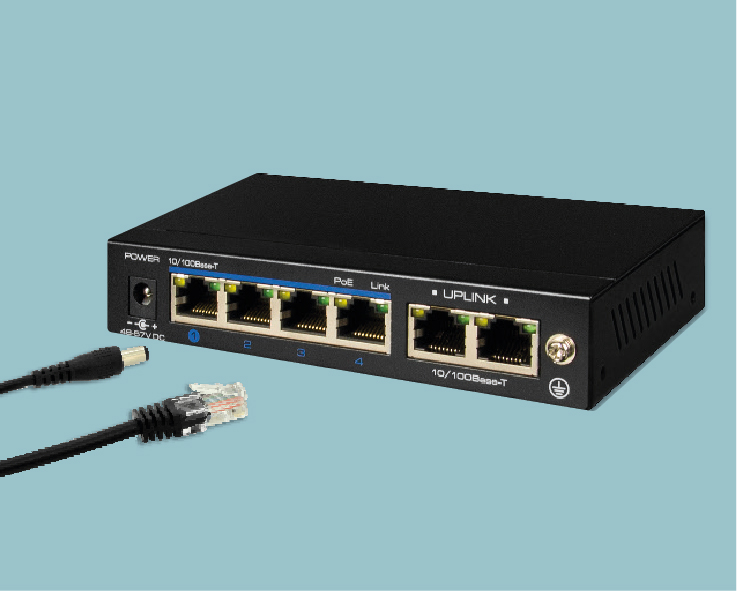 Other peripheral devices can also be operated with the discharged electricity. 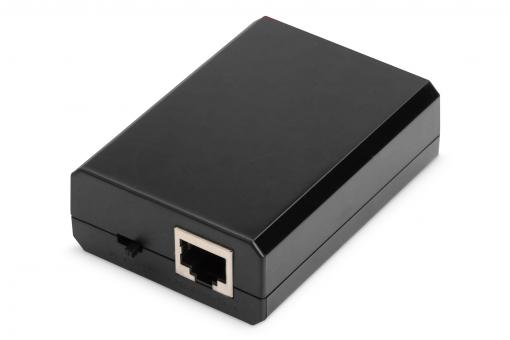 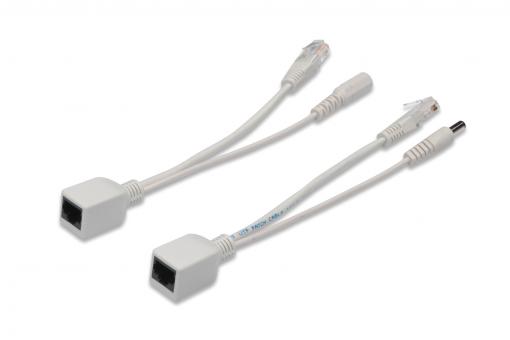 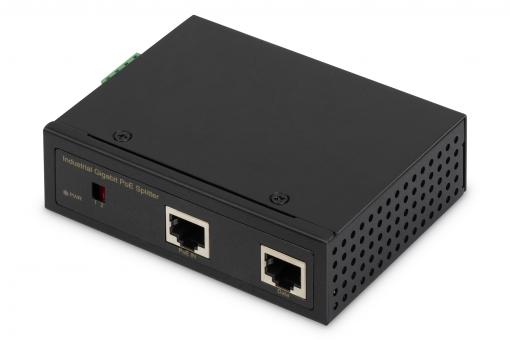 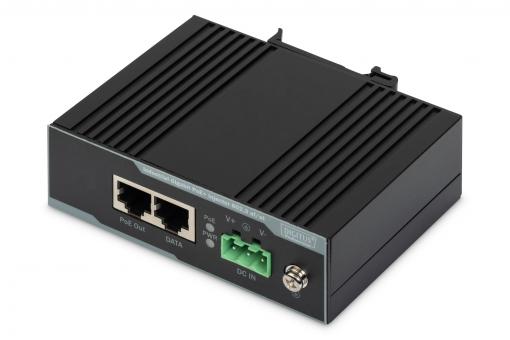 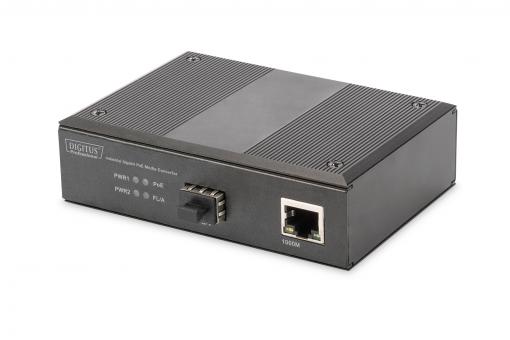 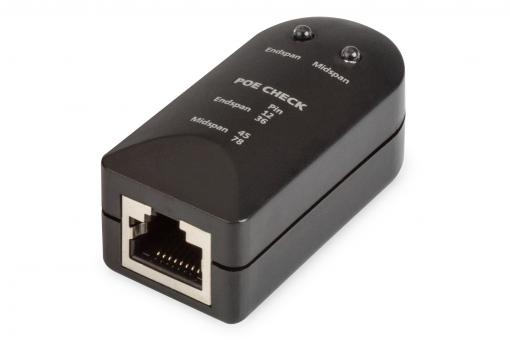 Stay up to date.
Get news from DIGITUS ® by ASSMANN.